According to Fxempire article published on yahoo!finance on Friday, the technical analysis sees  short-term momentum turning negative. They see target support is seen near the June lows at 1,750, as well as resistance near 1,789 or 1,808. Similarly, medium-term momentum has turned negative as the MACD generated a crossover sell signal. Above 1760, resistance resides near 1790-1800.

Dailyfx sees 1760 level as the key area to watch where failure to break above keeps the immediate pressure on the downside, with resistance around 1790-1800. In another article from today, they claim sellers are now testing the 50% Fibonacci expansion at 1717.42; beyond that is the pivotal year-to-date floor at 1676.91, a barrier reinforced by the 61.8% Fibonacci at 1670.43. Most importantly, breaking 2021 floor might set the stage for testing the $1600/oz figure. In yet another article, published Saturday, focus in on macroeconomic data. In particular it is expected dollar will get stronger, thus Gold would probably get weaker. (If US economy continues to perform well, gold prices would likely face mounting pressures).

On the other hand, some see this sell off in Gold proce as a buying opportunity. Pretty logical. See some compilation of related tweets on Kitco. In a separate commentary, however, Kitco writes that Gold sentiment has definitely turned bearish: in the Kitco Gold News Suvey published Friday, there was not a single bullish vote among Wall Street analysts.

If you are interested in a long-term prediction of Gold proce, I found a nice compilation at goldsilver.com. The below table is directly taken from that website, with no modifications. 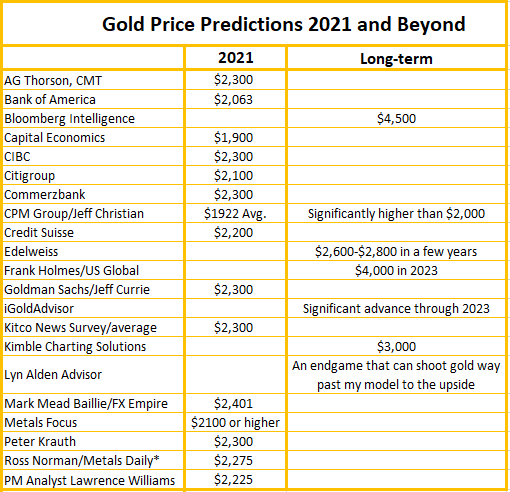 This is a clear sign, most analysts believe Gold will ultimately exceed $2000 per ounce this year (bullish!). Time will show.

There are two worthwile resources that are not mentioned in that table. Firstly, longforecast.com sees the Gold prices in the range 1552-1730 at the end of this year and reaching the level of $2000 not earlier than in 2023, although they don’t see this gain in value as a very probable scenario (bearish). gov.capital predicts a complete opposite of this and sees prices going even higher than most analysts, with Gold reaching the price of $2981 within a year, starting from today.

You might also be interested with a compilation of positive and negative predictions worldwide, available at crowdwisdom360.

Thank you for reading.